November Adoptables From Pets Without Parents

31 – the number of new faces I photographed while at Pets Without Parents on Monday! We had a special little assistant to help us out while photographing the dogs and cats. Arizona, a baby Pit Bull Terrier, was in her own cage in the playroom where I take the photos. So in-between each animal, I would stop by her crate and visit wither her. George and I both love her and IF we could take one more dog into our house, I am pretty sure it would be her! At just 9 1/2 weeks old she was flopping around her cage and wanting as much love as we could give her!

Before we wrapped up, there was the arrival of three Jack Russell Terrier Mix puppies. Two girls and a little boy. As soon as they had their initial vaccines, we snapped their photos. While photographing them, the staff at the rescue was trying to come up names for this trio. George and I were suggesting all sorts of random names from TV shows we watch. They ended up being the Three’s Company gang and were named Jack, Chrissy and Janet.

They are currently packed to capacity at Pets Without Parents with puppies, kitties, dogs and cats that are looking for homes. If you are looking for an adult cat, they have continued their adoption special of a reduced adoption fee of just $25 through the month of November!

The shelter is currently participating in a contest from FedEx that will allow one of six small business grants, including a $25,000 grand prize. If you are on Facebook – be sure to vote for them. You can vote every day through November 24th. Just follow this link. Since PWP started in 2001, they have dedicated themselves to helping more than 8,000 cats and dogs find their forever home in Central Ohio and surrounding areas. They are a great organization and this grant could greatly help their efforts! 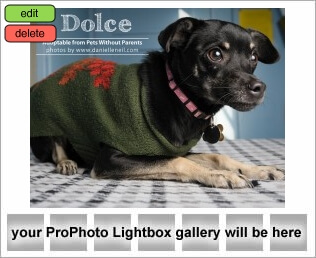